I work on a team that fixes complex systems under time pressure. My teammates have different skill sets, different priorities, and different levels of expertise. But we all have to troubleshoot and solve problems together.

This is really hard to do effectively. Fortunately for us in the relatively new domain of DevOps, situations like ours have been studied extensively in the last couple decades. We can use the results of this research to inform our own processes and automation for troubleshooting.

One of the most important concepts to emerge from recent teamwork research, common ground, helps us understand why collaborative troubleshooting breaks down over time. This breakdown leads to wasted effort and mistakes, even if the team maintains constant communication in a chat room. But if we extend ChatOps by drawing on some ideas from medical diagnosis, we can make troubleshooting way easier without losing the benefits of fluid team conversation.

Ergonomics researchers D.D. Woods and Gary Klein (the latter of whom I wrote about in What makes an expert an expert?) published a phenomenally insightful paper in 2004 called Common Ground and Coordination in Joint Activity. In it, they describe a particular kind of failure that occurs when people engage in joint cognition: the Fundamental Common Ground Breakdown. Once you learn about the Fundamental Common Ground Breakdown, you see it everywhere. Here’s how the Woods/Klein paper describes the FCGB:

When this happens, Party A and Party B lose common ground, which Woods & Klein define as “pertinent knowledge, beliefs and assumptions that are shared among the involved parties.” The two parties start making incorrect assumptions about each other’s knowledge and beliefs, which causes their common ground to break down further and further. Eventually they reach a coordination surprise, which forces them to re-synchronize their understanding of the coordinated activity: 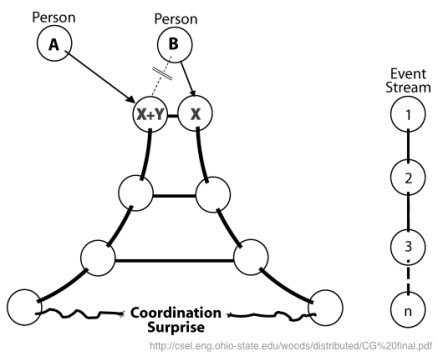 Seriously, the FCGB is everywhere. Check out the paper.

I’m especially interested in one particular area where an understanding of common ground can help us do better teamwork: joint troubleshooting.

Everybody’s into ChatOps these days, and I totally get it. When a critical system is broken, it’s super useful to get everybody in the same room and hash it out. ChatOps allows everybody to track progress, coordinate activities, and share results. And it also helps to have lots of different roles represented in the room:

The process of communicating across role boundaries isn’t just overhead: it helps us refine our own understanding, look for extra evidence, and empathize with each other’s perspectives.

But ChatOps still offers a lot of opportunities for common ground breakdown. The FCGB can occur whenever different people interpret the same facts in different ways. Interpretations can differ for many different reasons:

These FCGB opportunities all become more pronounced as the troubleshooting drags on and folks become tired, bored, and confused. And when somebody says they’ve lost track of common ground, what do we do? Two main things: we provide a summary of recent events and let the person ask questions until they feel comfortable; or we tell them to read the backlog.

The Q&A approach has serious drawbacks. First of all, it requires somebody knowledgeable to stop what they’re doing and summarize the situation. If people are frequently leaving and entering the chat room, you end up with a big distraction. Second of all, it leaves lots of room for important information to get missed. The Fundamental Common Ground Breakdown happens when somebody doesn’t know what to ask, so fixing it with a Q&A session is kind of silly.

The other way people catch up with the troubleshooting effort is by reading the backlog. This is even more inefficient than Q&A. Here’s the kind of stuff you have to dig through when you’re reading a chat backlog:

There’s a lot to unpack there – and that’s just 18 messages! Imagine piecing together a troubleshooting effort that’s gone on for hours, or days. It would take forever, and you’d still make a lot of mistakes. It’s just not a good way to preserve common ground.

So what do we need?

Differential Diagnosis as an Engine of Common Ground

I’ve blogged before about how much I love differential diagnosis. It’s a formalism that doctors use to keep the diagnostic process moving in the right direction. I’ve used it many times in ops since I learned about it. It’s incredibly useful.

In differential diagnosis, you get together with your team in front of a whiteboard – making sure to bring together people from a wide variety of roles – and you go through a cycle of 3 steps:

Once you’re done with step #3, you can cross out a hypothesis or two. Then you head back to step #1 and repeat the cycle until the problem is identified.

A big part of the power of differential diagnosis is that it’s written down. Anybody can walk into the room, read the whiteboard, and understand the state of the collaborative effort. It cuts down on redundant Q&A, because the most salient information is summarized on the board. It eliminates inefficient chat log reading – the chat log is still there, but you use it to search for specific pieces of information instead of reading it like a novel. But, most importantly, differential diagnosis cuts down on fundamental common ground breakdowns, because everybody has agreed to accept what’s on the whiteboard as the canonical state of troubleshooting.

We don’t want to lose the off-the-cuff, conversational nature of ChatOps. But we need a structured source of truth to provide a point-in-time understanding of the effort. And we (read: I) don’t want to write a whole damn software project to make that happen.

My proposal is this: use Trello for differential diagnosis, and integrate it with the chat through a Hubot plugin. I haven’t written this plugin yet, but it shouldn’t take long (I’ll probably fork hubot-trello and start from there). That way people could update the list of symptoms, hypotheses, and tests on the fly, and they’d always have a central source of common ground to refer to.

In the system I envision, the chat room conversation would be peppered with statements like:

And the resulting differential diagnosis board, containing the agreed-upon state of the troubleshooting effort, might look like this example, with cards labeled to indicate that they’re no longer in play.

What do you think?

Let me know if your organization already has something like this, or has tried a formal differential diagnosis approach before. I’d love to read some observations about your team’s process in the comments. Also, VictorOps has a pretty neat suite of tools that approaches what I have in mind, but I still think a more conceptually structured (not to mention free) solution could be very useful.

Automation is most effective when it’s a team player. By using automation to preserve common ground, we can solve problems faster and more thoroughly, with less frustration and less waste. And that all sounds pretty good to me.